In 2013, Rosemount’s Police force began wearing a new design intended to give a modern look while preserving the Department’s history. A committee of six Officers designed the new patch. The committee explained the elements they incorporated in the design: 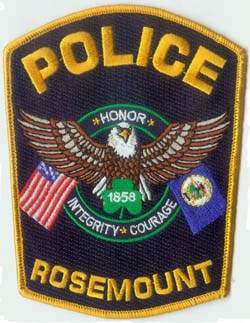 The shamrock signifies the rich Irish tradition in Rosemount. The symbol is part of the officially adopted City logo and flag. Many other community institutions such as the Rosemount High School and Elementary School display the shamrock symbol. In addition, Rosemount is well-known for the annual Leprechaun Days event at the end of July, and many of the first settlers that came to Rosemount in the 1850’s were Irish.

Equally important, the seal contains the words, integrity, courage, and honor. As Police Officers, we have all been sworn to protect and serve the community. Although this phrase still holds considerable meaning to us as a committee, we feel that the ideals and/or characteristics of integrity, courage, and honor are essential to properly protect and serve. With these principles incorporated into the patch, it will serve as a daily reminder to Officers and the community on what type of service to expect from our Department.

Finally, the American Flag, Bald Eagle, and Minnesota State Flag provide a sense of patriotism to the uniform. The Police Department is committed the respect and dignity of all citizens and upholding their Constitutional Rights. The Rosemount Police Department wanted to show our commitment and support to law enforcement officers across the United States.