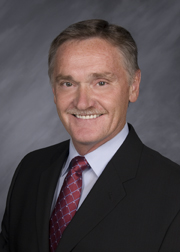 William H. Droste was elected in 2002 to his first term as mayor of Rosemount, Minnesota.  Prior to his election, Mayor Droste served on the Rosemount Planning Commission from 1995 to 2001. His service to the community includes current positions on the Minnesota Valley Transit Authority Board of Directors, Minnesota Statewide Emergency Communications Board, Regional Council of Mayors, and Family Housing Fund Board. He also serves on the National League of Cities Transportation Infrastructure & Services Committee.

Droste is employed as a realtor with Keller Williams Preferred Realty. Prior to that, he worked 28 years in the communications industry for Qwest Communications as an Operations Manager and Senior Market Analyst. He also served eight years in the Iowa Army National Guard.

Bill has lived in Rosemount since 1989. He has three adult children: Franny, Elizabeth, and William II, and four grandchildren.