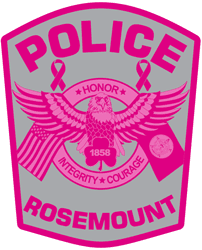 The Pink Patch Project is a charity campaign designed to raise cancer awareness by Law Enforcement agencies nationwide during the month of October. The goal is to generate awareness by wearing the very distinctive Pink Patches on the police uniform to generate conversations about an illness that everyone can relate to. On October 1, uniformed Rosemount Police Officers wear pink patches on their uniforms in support of Breast Cancer Awareness month in an effort to raise money for cancer awareness. For the duration of the month, Pink Rosemount Police Patches and challenge coins are also sold to the public. The Rosemount Police Department has in turn partnered with the American Cancer Society. All money raised through donations and the sales of the Pink Patch items have been donated to their organization. The event has been very successful and enjoyable for the participants. Officers have even joined the American Cancer Society in their annual cancer walk at US Bank Stadium.

Please join the Rosemount Police Department and the American Cancer Society in the fight against CANCER! Check back in October to see how you can donate or purchase Pink Patch items. Also check out our Facebook page to stay notified of updates.

*No tax dollars were used to pay for or initiate the funding of this charity event.  Officers paid for the patches and uniforms and their participation in the project is voluntary*