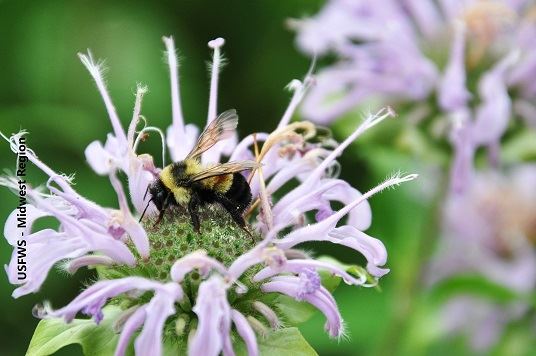 75% of all flowering plants rely on pollinators to reproduce, including one third of all the food we eat: blueberries, chocolate, coffee, melons, peaches, pumpkins, vanilla, almonds, tomatoes, and so much more!  Most of us think of bees when we think of pollinators, but pollinators also include a host of other animals, such as butterflies, moths, hummingbirds, ants, flies, and beetles; there are over 200,000 pollinator species worldwide. In Rosemount, we are lucky to be home to the federally endangered and Minnesota state bee, the Rusty Patched Bumble Bee. Additionally, Dakota County is home to 125 rare species of plants and animals listed as of special concern, threatened, or endangered by the State of Minnesota or Federal Government. The City of Rosemount has initiated several pollinator and habitat conservation programs we encourage residents to take part in.  A few are listed below.

No Mow May for 2022 has ended. All participating residents must mow lawns to be compliant with the City lawn height standard of 8 inches or less by the end of the day on June 5. The City will resume inspection and enforcement on lawn height on June 6. Check back in spring of 2023 to participate.

About No Mow May

May can be a tough time for pollinators. Many, including bees, are emerging from winter hibernation at a time of year when there isn't a lot of food and cover. One way we can help pollinators through this difficult time is to press pause on mowing in May. You may have a few more dandelions, but you'll also have more bees! Studies have shown suspending mowing in May can increase the number and diversity of bees.

The City Council recently enacted a resolution proclaiming No Mow May. In support of No Mow May, the City will be temporarily suspending enforcement of lawn height ordinances for the month of May on occupied residential properties in good standing.

The City asks that residents wishing to participate in NO Mow May do the following:

Get your kids involved in learning about the important work of pollinators. Check out these fun pollinator activity sheets for kids:

Find more information on No Mow May at the Bee City USA website.

You can report an issue via the City website.  You can also email the ESC liaison or call 651-322-2075 if you have questions about the Environment and Sustainability Commission.

Under Construction - Come Back Soon

Under Construction - Come Back Soon